What Clubhouse did (absolutely) wrong?

After gaining an amazing and significant user base on iOS, Clubhouse finally started testing its Android app. Earlier this year the company closed the second round of funding led by a16z. Altogether, they shared plans to use the funds for Android app engineering, scaling its technology and infrastructure.

They also introduced a new Creator Grant Program. The company seems to be sticking to its plan so far. But just imagine, how the app would flourish if they launched Android in beta at the same time as iOS?

Looking back at numbers

Taking all the data into consideration, it still doesn’t mean the fatal end of Clubhouse. The company is already building the creator community and establishing a number of popular shows, which can result in less daily habit usage, but into predictable and systematic usage.

But, as experts say, the boom of the users could be prolonged if the app would have released on an Android version earlier. Market struggled for the Android version so much that even found a way of creating DIY Clubhouse App, with b̶l̶a̶c̶k̶j̶a̶c̶k̶ better security, voice recording, AI, and support for any platform. Nota bene: the app is not the part of the ecosystem, rather then just a new application.
Creators basically suggested using  Voximplant’s Web SDK, so clients can use a common browser as a client.

And even though Voximplant engine goes far beyond the standard functionality of Clubhouse, like there’s a possibility to schedule a voice room to record if the user’s unable to join due to a scheduling conflict, adding messages, interactive voice menus with speech synthesis and recognition creation. However, taking into account all of the technical complexities, this version had remained for enthusiasts only. And Android users are still left without a global ecosystem.

What could go different if Clubhouse chose React Native?

Short answer: everything.
A longer answer: to give a sneak peak on RN – this is a jS framework, which allows to build the app for both Android and iOS simultaneously. The code is usually written once, which makes the work much faster and smoother. Thanks to it clients usually focus more on details that matter. From the business point of view, faster delivery of MVP version for both Android and iOS could help to test the app on the market in a deeper and faster way, thus touting the investor’s attention faster. It is also very common while developing iOS and Android that applications are having a different set of features and a roadmap plan, designs, which are basically harder to manage and adds load to the Back-End, since the team needs to support several versions of APIs.

How was it with Clubhouse? With their choice of Native Development, they basically skipped the chance to gain more popularity with Android users, with a version that went in beta testing later. The Clubhouse also had hired a separate team to the existing iOS team, which causes the writing codebase for both platforms to be much more expensive and longer.

That is why for faster MVP delivery, idea testing and user feedback gathering, the Pre-Seed and Seed startups are not recommended to use the Native technologies without the special need.

In our recent React Native cases, like: WeVoyce, NDAX.IO, and others, we followed exactly the idea of “Deliver Reasonably Fast -> Get the Feedback -> Release the Best version -> Engineer in Agile” and helped our partners to develop game-changing apps within a quite short time period.

What are the pros and cons of React Native Development?

As was stated earlier, the choice of Hybrid React Native is of extreme importance for MVPs, POC’s, and Apps with standard interactions and UI. Find more on the comparison table about the main pros and cons. 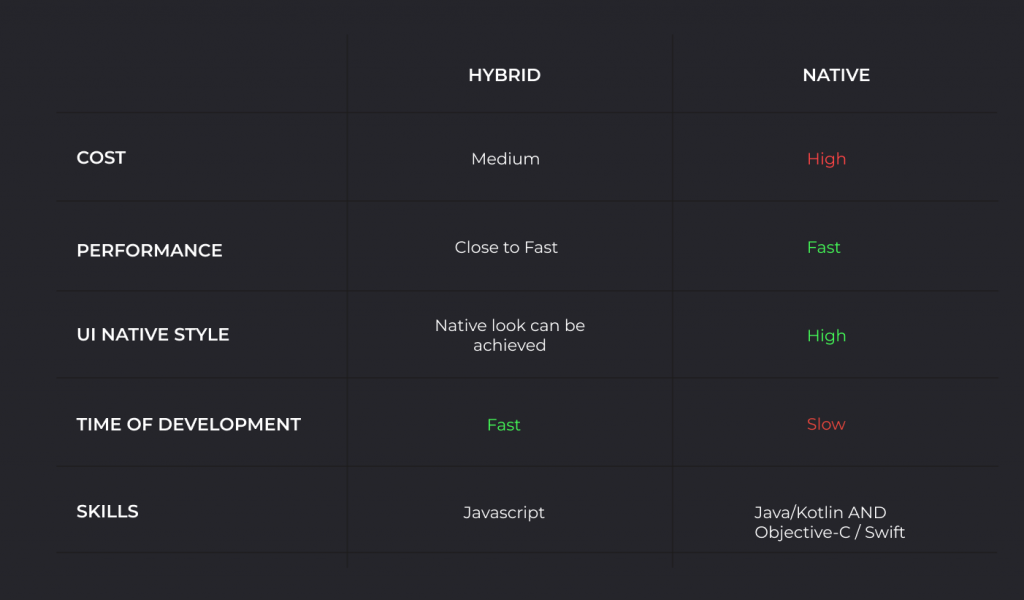 Among businesses, who’re looking for a time-wise and cost-effective solution, there are dozens of enterprises, who use React Native already, causing their business to flourish.

To sum up, creating the exclusivity of the app, choosing only one platform for showcasing your brand voice, might cause anger amongst users. Lost audience of the Android caused the loss of the ecosystem part, and helped competitors to build the missing functionality very quickly. For instance, Facebook and Twitter had already released the gapped functionality from the Clubhouse, resulting in the increased income for the last quarter.

Also, re-engaging your audience after such a tremendous rise and sharp decline in daily users engagement might be very expensive. If the company chose to go with React Native, they would definitely have less of the edge cases when it came to the Android release

PreviousSuccess Story: Living Security raised a $14 million Series B round
NextWeSoftYou is a Triple Clutch Awarded for the Last Month!
Recents posts